On Monday 21 May 2007, the Director-General of UNESCO, Mr Koichiro Matsuura, opened the first meeting of the International Advisory Panel (IAP) on Education for All (EFA). Comprised of representatives of the different EFA stakeholders, the Panel has been established to ensure more rigorous preparation and follow-up of the main EFA events, and to advise UNESCO, as lead coordinator of EFA, on how to achieve maximum political momentum and impact. 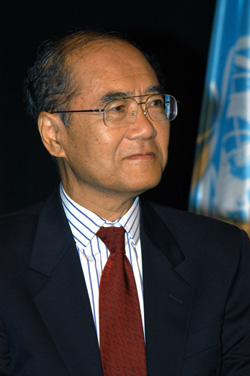 In his opening remarks Mr Matsuura addressed recent developments and key challenges in EFA. He spoke first of the re-sequencing of the main EFA mechanisms, namely the launch of the EFA Global Monitoring Report (GMR) and the meetings of the Working Group and the High-Level Group. The GMR will now be made available before the meeting of the Working Group. This will enable the Working Group to assess the data and analysis of the Report and to translate these findings into strategic policy recommendations for consideration by the High-Level Group. The aim is to provide the latter with a more focused and action-oriented agenda. As the Director-General pointed out, the concentration of all main EFA events in the last quarter of each year makes the IAP’s role all the more important.

While Mr Matsuura recognized the distance travelled since the six EFA goals had been set in Dakar, Senegal, in 2000, he underscored that the pace of progress remained insufficient and that significant new efforts were needed if the world was to achieve EFA by 2015.

“The funding of EFA is a constant and urgent concern”, Mr Matsuura noted. Although important new commitments have been made, they stop short of the sums required to provide good quality education for all. “We look for further and stronger pledges in the next six months, as we move towards the High-Level Group meeting”, he urged.

The Director-General likewise voiced his concern that the view of EFA tends to be unduly narrowed to primary schooling. While this is central to the vision of EFA, the latter remains much broader, encompassing gender equality, early childhood education, quality, lifelong learning and literacy. Mr Matsuura underlined: “Achieving Education for All should be seen as a single, integrated agenda, and greater efforts must be made to address all six of the EFA goals”. In this regard the Director-General drew attention to the series of regional and sub-regional conferences that UNESCO was organizing in support of global literacy, one of the most neglected aspects of the EFA agenda.

In conclusion the Director-General pledged UNESCO’s steadfast commitment to providing Education for All: “I can assure our partners that I continue to give the highest priority to EFA, and to the international cooperation which is its lifeblood”.